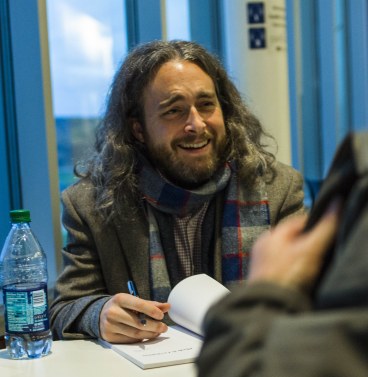 Adam Tavel signs a copy of his book for a fan following the Midnight Sun Visiting Writers reading at UAF Museum of the North, September 18. Spencer Tordoff / Web Editor

Adam Tavel was the winner of Permafrost‘s 2014 Poetry Book Prize for his poetry collection entitled  Plash & Levitation, which was published by The University of Alaska Press. The recipient of  the 2010 Robert Frost Award from the Robert Frost Foundation, Tavel is  also the author  of  The Fawn Abyss  (Salmon Poetry, forthcoming 2016) and  the chapbook Red Flag Up  (Kattywompus, 2013).  Tavel  is currently a professor of English at Wor-Wic Community College on Maryland’s Eastern Shore.

Tavel’s poems have been anthologized in  Dogs Singing: A Tribute Anthology  (Salmon Poetry, 2010),  A Face to Meet the Faces: An Anthology of Contemporary Persona Poetry  (University of Akron Press, 2012),  For Rhino in a Shrinking World: An International Anthology of Poetry  (The Poets’ Printery, 2013),  Manifest West: Even Cowboys Carry Cell Phones  (Western Press Books/University Press of Colorado, 2013), and  The Waiting Room Reader, Volume II: Words to Keep You Company  (CavanKerry Press, 2013).

From 2005-2014, Tavel served as poetry editor for the journal Conte.  In April 2013, he was the featured guest editor for a special poetry issue of  Connotation Press: An Online Artifact.  He recently joined the staff of  Plume  as reviews editor.

You can learn more about Adam by visiting his website.